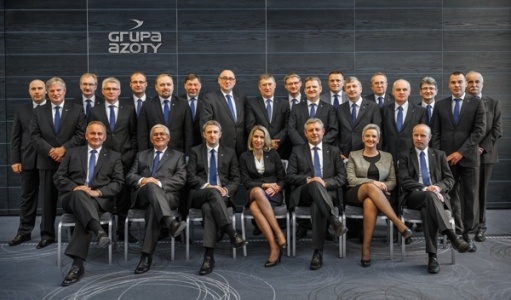 The Council was appointed by virtue of a resolution of the Management Board of the Parent, Grupa Azoty S.A, in accordance with its established organisational model. It is composed of presidents and management board members from across the Group, as well as the managing director of the Parent.

The Grupa Azoty Council is a permanent body whose main tasks will include advising, issuing opinions and initiating measures to improve management practises and to make changes in functional and business areas (in particular, the strategic development and marketing plans). It will also be responsible for issuing opinions on proposed planning assumptions made in the drafting of separate and consolidated budgets for Grupa Azoty companies for individual financial years, as well as long-term plans.

The Council will also serve as a platform for improving communications and cooperation within the Group, for exchanging information about joint operations and work aimed to develop the reporting system for the management boards of Grupa Azoty and its subsidiaries, as well as for initiating social responsibility projects and promotional activities.

"The consolidation work is in progress and is already having measurable effects. To us, this process is about the ceaseless effort to achieve operational excellence. The role of the Grupa Azoty Council, as a body with a broad remit and an open structure, is to aid us in those efforts," said Paweł Jarczewski, President of the Management Board of Grupa Azoty S.A., at the Council’s inaugural meeting on Tuesday, December 10th. At the meeting, the newly appointed members of the Grupa Azoty Council received their nominations and were instructed on the objectives of the body.