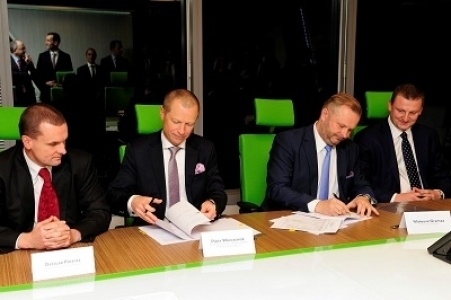 Under the contract, Air Products will supply gaseous oxygen and nitrogen to the Grupa Azoty Zakłady Azotowe Kędzierzyn S.A. plant as well as liquid oxygen and nitrogen to other customers in Poland. The project will be implemented following an upgrade of Air Products’ production facility with a daily production capacity of approximately 2,000 tonnes, one of the largest such units in Poland. Industrial gases provided by Air Products are used by Grupa Azoty Zakłady Azotowe Kędzierzyn S.A. to manufacture ammonia and OXO alcohols and to support auxiliary processes. Nitrogen is also used to ensure safety of the production units on-site.

- We greatly value long-term relationships with customers based on mutual trust. Our successful cooperation with Grupa Azoty Zakłady Azotowe Kędzierzyn S.A. has resulted in signing a new contract extending gas supplies critical to our customer’s operations. The Air Products unit in Kędzierzyn-Koźle is our largest production facility in Central Europe. We view Poland as our key market and plan further investment and growth projects here - said Piotr Wieczorek, President of the Management Board, Vice President Central Europe, Air Products.

- An agreement with such a large and reliable partner as Air Products is a guarantee of stable supplies of industrial gases to our company in Kędzierzyn - said Mariusz Bober, President of the Management Board of Grupa Azoty, who took part in the execution of the contract.

- Thanks to the signing of the contract, Air Products will also upgrade its production unit situated at our premises. This is particularly important as we use significant volumes of industrial gases -  said Mateusz Gramza, President of the Management Board of Grupa Azoty ZAK S.A.

Because of its unique properties, such as the very low temperature of -196 °C, liquid nitrogen has a wide range of applications. It can be used for quick food freezing, ice-cream manufacturing, and packing of food products, such as crisps or drinks. It is also used in cryotherapy, manufacture of plastic, metalworking, and for production of artificial snow. Liquid oxygen is used by hospitals, for waste water treatment, and in fish farming to oxygenate water. It is also useful in improving the quality and efficiency of metal and glass production.

Air Products (NYSE: APD) is a world-leading industrial gases company. In operation for 75 years, the company provides atmospheric and process gases as well as equipment for the refining, petrochemical, metals, electronics, and food and beverage industries. Air Products is also the world’s leading supplier of liquefied natural gas process technology and equipment.

Air Products is present in 15 countries in Europe, including Central and Eastern European countries (Slovakia, the Czech Republic, Russia, and Poland). The company is one of the largest industrial gases manufacturers in Poland. For more than 20 years, Air Products has been pursuing its strategy of growth in Poland through carefully selected projects.